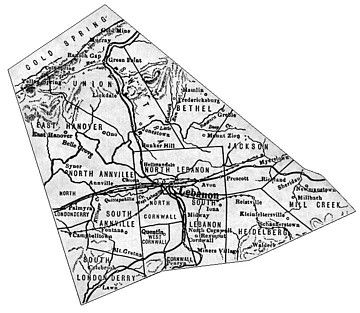 In colonial times, the Lebanon Valley was part of Chester County, one of the three original counties of the Province of Pennsylvania. In 1729, the western section was divided off to make Lancaster County. After the Revolution, the area was divided again in 1785 with the formation of Dauphin County. In the early 1800s, local residents petitioned the Commonwealth of Pennsylvania for a new county, citing the inconvenient travel time to Harrisburg and Lancaster to conduct routine county business. Finally, in 1813, Lebanon County was formed from portions of Lancaster and Dauphin counties, with minor boundary revisions in 1814 and 1821. [More History »]

The town of Lebanon became a borough in 1821, and in 1885, it was organized into a third-class city. Other townships of the county were divided and boroughs formed at various times as listed below.

Population statistics are 2010 results from the US Census Bureau.

Please see the Web Resources page for links to websites of local interest.