The Lebanon County Historical Society is proud of its past, from its humble beginnings as a meeting of a few civic leaders, through years of cramped office space, to its first property on Walnut Street, to its current home on Cumberland Street. Through it all, the Society has depended on the participation of members and volunteers for the ongoing support of its mission.

The mission of the Lebanon County Historical Society is to collect, exhibit, interpret, preserve, and publish the history of the Lebanon Valley. The Society shall accomplish this mission through its museums, libraries, archives, publications, programs, and historic sites. The Society shall hold its collections in trust for the community and recognizes its responsibility to educate and inform the public about the history of the Lebanon Valley and make its holdings reasonably accessible to the public.

The Society is located at 924 Cumberland Street in Lebanon, Pennsylvania, 1/2 block west of the intersection of Route 422 West (Cumberland Street) and Route 72 North (Ninth Street). The building houses the Stoy Museum and Gift Shop, the Hauck Research Archives library, the Reese Memorial Hall, and the Society office. The Society also owns and maintains The Union Canal Tunnel, the oldest existing transportation tunnel in the United States, for the canal which once linked Reading and Harrisburg. 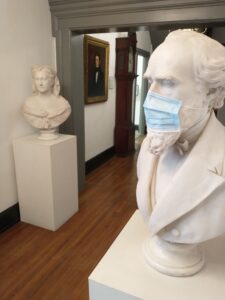